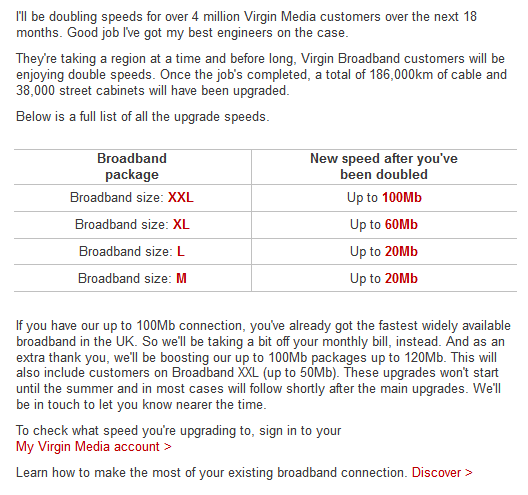 Many customers are not very happy about this and rightly so, it’s misleading to say the least and it’s not as if the customers have had any choice in the matter. Richard has decided to upgrade your broadband and bill you for it later.

‘Doubling everyone’s speed is a pretty big job’ expensive too i bet, perhaps you should blow less of your budget on the marketing campaign and more on the upgrade!

That said, if the upgrade delivers what’s promised, and speeds are doubled accross the UK then that’s a pretty good leap forward for UK Broadband, especially as Virgin currently offer some of the fastest broadband speeds currently available in the UK.

If however, further price hikes are a necessary part of the ‘improved service’ roadmap Virgin might want to consider being more transparent with these plans and associated costs and offer customers a choice to either retain their current speed at no extra cost, or pay more a month for additional speed.

Virgin have stated these additional costs are part of the ‘annual review of bundle prices’. That’s fair enough Richard, so long as you don’t mind when customers in turn want to review their bundle prices, and perhaps make a change midway through an 18 month contract.

Also worth pointing out, advertised prices on Virgin’s website for perspective new customers haven’t changed, that’s not to say they won’t change after signing the contract. Buyer beware.